Emmerich, Germany, March 2018: Probat, world market and technology leader for coffee roasting plants and machinery marks its anniversary year with a special event for customers and partners during the Annual Convention of the National Coffee Association (NCA) on March 16, 2018. 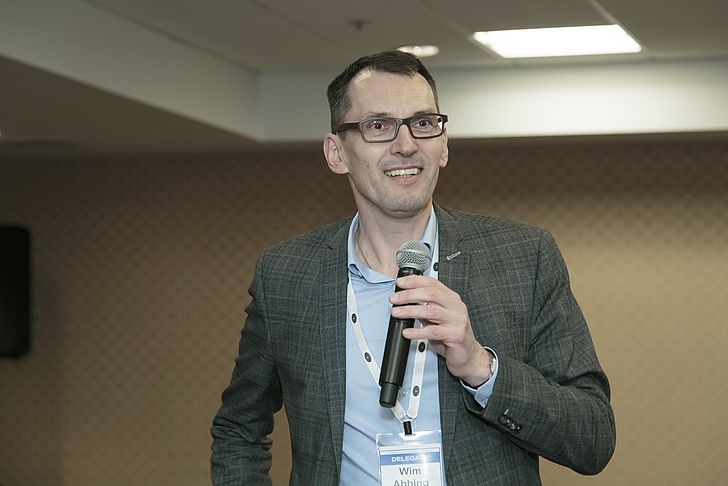 Earlier this year Probat rang in its 150th anniversary commemorations with a special celebration dinner for customers and partners at IICF, India’s leading coffee event. The kickoff on the Indian peninsula was now followed by a sister event at the NCA’s Annual Convention on March 16, 2018. Alongside its American subsidiary Probat Inc., German-based Probat invited customers and partners to a reception commemorating 150 years at the Sheraton Hotel in New Orleans where this year`s NCA Annual Convention took place.

Probat 150 year commemoration reception
After his opening address, Wim Abbing, CEO Probat, presented the company’s 150th anniversary movie. The film portrait took attendees on a comprehensive trip through 150 years of manufacture of roasting plants and machinery, providing an insight into four generations of family business. The official part of the event was then concluded by John Fortin, President Probat Inc., who expressed his gratitude for the excellent cooperation between Probat and its North American customers: “This year is a very special one for Probat, as the company celebrates its 150th anniversary with various events all over the world. Within a much shorter but relevant time frame, Probat Inc. has enjoyed very loyal partnerships with its North American customers and thus has made a great contribution to Probat‘s worldwide success. I would like to specifically thank all our North American customers, partners and friends who took time out of their schedules to help Probat commemorate this significant milestone in its history by attending this reception.“

Probat 150 - Connecting Markets
The receptions at the IICF and the NCA Annual Convention are two of a number of milestones, which Probat sets in its anniversary year. The Probat Coffee Symposium ‘Connecting Markets’ is certainly going to be the most remarkable jubilee event. On this occasion, leaders and executives of the international coffee industry will come together at the company’s headquarters in Germany on September 19 - 20, 2018 to share their knowledge with each other. The two-day event will stand out for its thought-provoking key note speeches and innovative think tanks accompanied by exciting breakout sessions.

Stay informed about the Probat anniversary celebrations at www.probat150.com
Save the date: Coffee Symposium ‘Connecting Markets’ at the Probat company headquarters in Emmerich from September 19 - 20, 2018